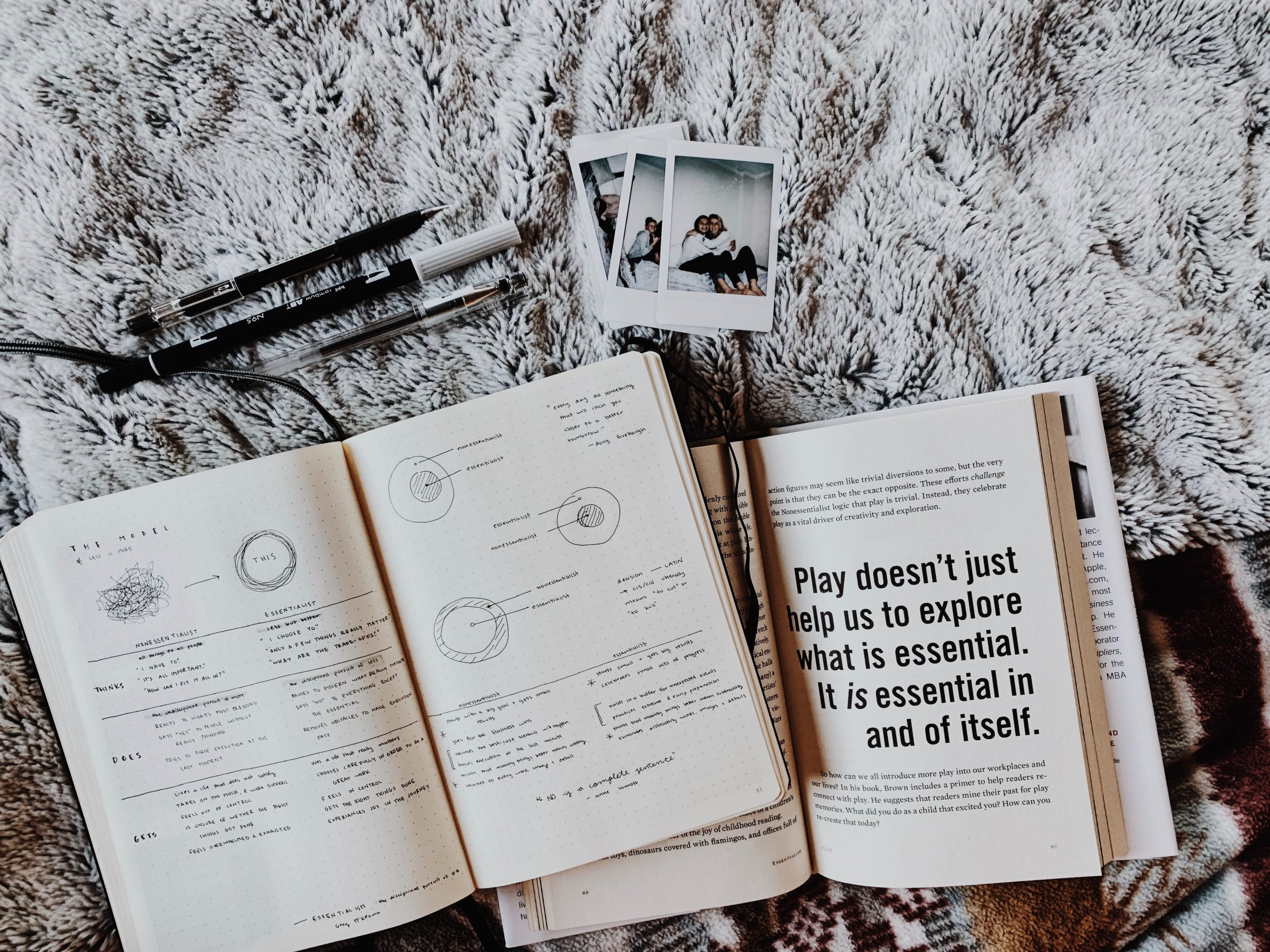 …The basic value proposition of Essentialism: only once you give yourself permission to stop trying to do it all, to stop saying yes to everyone, can you make your highest contribution towards the things that really matter.

The way of the Essentialist is the relentless pursuit of less but better. It doesn’t mean occasionally giving a nod to the principle. It means pursuing it in a disciplined way.

The way of the Essentialist rejects the idea that we can fit it all in. Instead it requires us to grapple with real trade-offs and make tough decisions. In many cases we can learn to make one-time decisions that make a thousand future decisions so we don’t exhaust ourselves asking the same questions again and again.

The way of the Essentialist means living by design, not by default. Instead of making choices reactively, the Essentialist deliberately distinguishes the vital few from the trivial many, eliminates the nonessentials, and then removes obstacles so the essential things have clear, smooth passage. In other words, Essentialism is a disciplined, systematic approach for determining where our highest point of contribution lies, then making execution of those things almost effortless.

The word priority came into the English language in the 1400s. It was singular. It meant the very first or prior thing. It stayed singular for the next five hundred years. Only in the 1900s did we pluralize the term and start talking about priorities. Illogically, we reasoned that by changing the word we could bend reality. Somehow we would now be able to have multiple “first” things.

But when we try to do it all have and have it all, we find ourselves making trade-offs at the margins that we would never take on as our intentional strategy. When we don’ purposefully and deliberately choose where to focus our energies and time, other people – our bosses, our colleagues, our clients, and even our families – will choose for us, and before long we’ll have lost sight of everything that is meaningful and important. We can either make our choices deliberately or allow other people’s agendas to control our lives.

Essence: What is the core mind-set of an Essentialist?

This part of the book outlines the three realities without which Essentialist thinking would be neither relevant nor possible. One chapter is devoted to each of these in turn.

To harness the courage we need to get on the right path, it pays to reflect on how short life really is and what we want to accomplish in the little time we have left. As poet Mary Oliver wrote: “Tell me, what is it your plan to do / with your one wild and precious life?”

Some believe the relationship between efforts and results is even less linear, following what scientists call a “power law.” According to the power law theory, certain efforts actually produce exponentially more results than others. For example, as Nathan Myhrvold, the former chief technology officer for Microsoft, has said (and then confirmed to me in person), “the top software developers are more productive than average software developers not by a factor of 10x or 100x or even 1,000x but by 10,000x.” it may be an exaggeration, but it still makes the point that certain efforts produce exponentially better results than others.

To discern what is truly essential we need space to think, time to look and listen, permission to play, wisdom to sleep, and the discipline to apply highly selective criteria to the choices we make.

The word school is derived from the Greek word schole, meaning “leisure.” Yet our modern school system, born in the industrial revolution, has removed the leisure – and much of the pleasure – out of learning. Sir ken Robinson, who has made the study of creativity in schools his life’s work, has observed that instead of fueling creativity through play, schools can actually kill it: “We have sold ourselves into a fast-food model of education, and it’s impoverishing our spirit and our energies as much as fast food is depleting our physical bodies… Imagination is the source of every form of human achievement. And it’s the one thing that I believe we are systematically jeopardizing in the way we educate our children and ourselves.”

Yet of all animal species, Stuart Brown writes, humans are the biggest players of all. We are built to play and built through play. When we play, we are engaged in the purest expression of our humanity, the truest expression of our individuality. Is it any wonder that often the times we feel most alive, those that make up our best memories, are moments of play?

…the second most important factor differentiating the best violinists from the good violinists was actually sleep. The best violinists slept an average of 8.6 hours in every twenty-four-hour period: about an hour longer than the average American. Over the period of a week they also spent an average of 2.8 hours of napping in the afternoon: about two hours longer than the average. Sleep, the authors of the study concluded, allowed these top performers to regenerate so that they could practice with greater concentration. So yes, while they practiced more, they also go more out of those hours of practice because they were better rested.

(Note: the most important factor was the amount of time spent practicing, in case that was unclear.)

Our highest priority is to protect our ability to prioritize.

An essential intent, on the other hand, is both inspirational and concrete, both meaningful and measurable. Done right, an essential intent is one decision that settles one thousand later decisions. It’s like deciding you’re going to become a doctor instead of a lawyer. One strategic choice eliminates a universe of other options and maps a course for the next five, ten, or even twenty years of your life. Once the big decision is made, all subsequent decisions come into better focus.

Creating an essential intent is hard. It takes courage, insight, and foresight to see which activities and efforts will add up to your single highest point of contribution. It takes asking tough questions, making real trade-offs, and exercising serious discipline to cut out the competing priorities that distract us from our true intention. Yet it is worth the effort because only with real clarity of purpose can people, teams, and organizations fully mobilize and achieve something truly excellent.

Some people’s days are full to the brim with soft commitments they have taken on unintentionally through an offhand comment or casual conversation they had somewhere with someone.

Nonessentialists tend to think of boundaries as constraints or limits, things that get in the way of their hyperproductive life. To a Nonessentialist, setting boundaries is evidence of weakness. If they are strong enough, they think, they don’t need boundaries. They can cope with it all. They can do it all. But without limits, they eventually become spread so thin that getting anything done becomes virtually impossible.

Essentialists, on the other hand, see boundaries as empowering. They recognize that boundaries protect their time from being hijacked and often free them from the burden of having to say no to things that further others’ objectives instead of their own. They know that clear boundaries allow them to proactively eliminate the demands and encumbrances from others that distract them from the true essentials.

Whoever it is that’s trying to siphon off your time and energies for their own purpose, the only solution is to put up fences. And not at the moment the request is made – you need to put up your fences well in advance, clearly demarcating what’s off limits so you can head off time wasters and boundary pushers at the pass. Remember, forcing these people to solve their own problems is equally beneficial for you and for them.

Research has shown that of all forms of human motivation the most effective one is progress. Why? Because a small, concrete win creates momentum and affirms our faith in our further success. In his 1968 Harvard Business Review article entitled “One More Time: How Do You Motivate Employees?” among the most popular Harvard Business Review articles of all time, Frederick Herzberg reveals research showing that the two primary internal motivators for people are achievement and recognition for achievement. More recently, Teresa Amabile and Steven Kramer gathered anonymous diary entries from hundreds of people and covering thousands of workdays. On the basis of these hundreds of thousands of reflections, Amabile and Kramer concluded that “everyday progress – even a small win” can make all the difference in how people feel and perform. “Of all the things that can boost emotions, motivation, and perceptions during a workday, the single most important is making progress in meaningful work,” they said.

The ancient Greeks had two words for time. The first was chronos. The second was kairos. The Greek god Chronos was imagined as an elderly, gray-haired man, and his name connotes the literal ticking clock, the chronological time, the kind we measure (and race about trying to use efficiently). Kairos is different. While it is difficult to translate precisely, it refers to time that is opportune, right, different. Chronos is quantitative; kairos is qualitative. The latter is experienced only when we are fully in the moment – when we exist in the now.

The Power of Habit Quotes by Charles Duhigg

13 Great Quotes from Steal Like an Artist by Austin Kleon