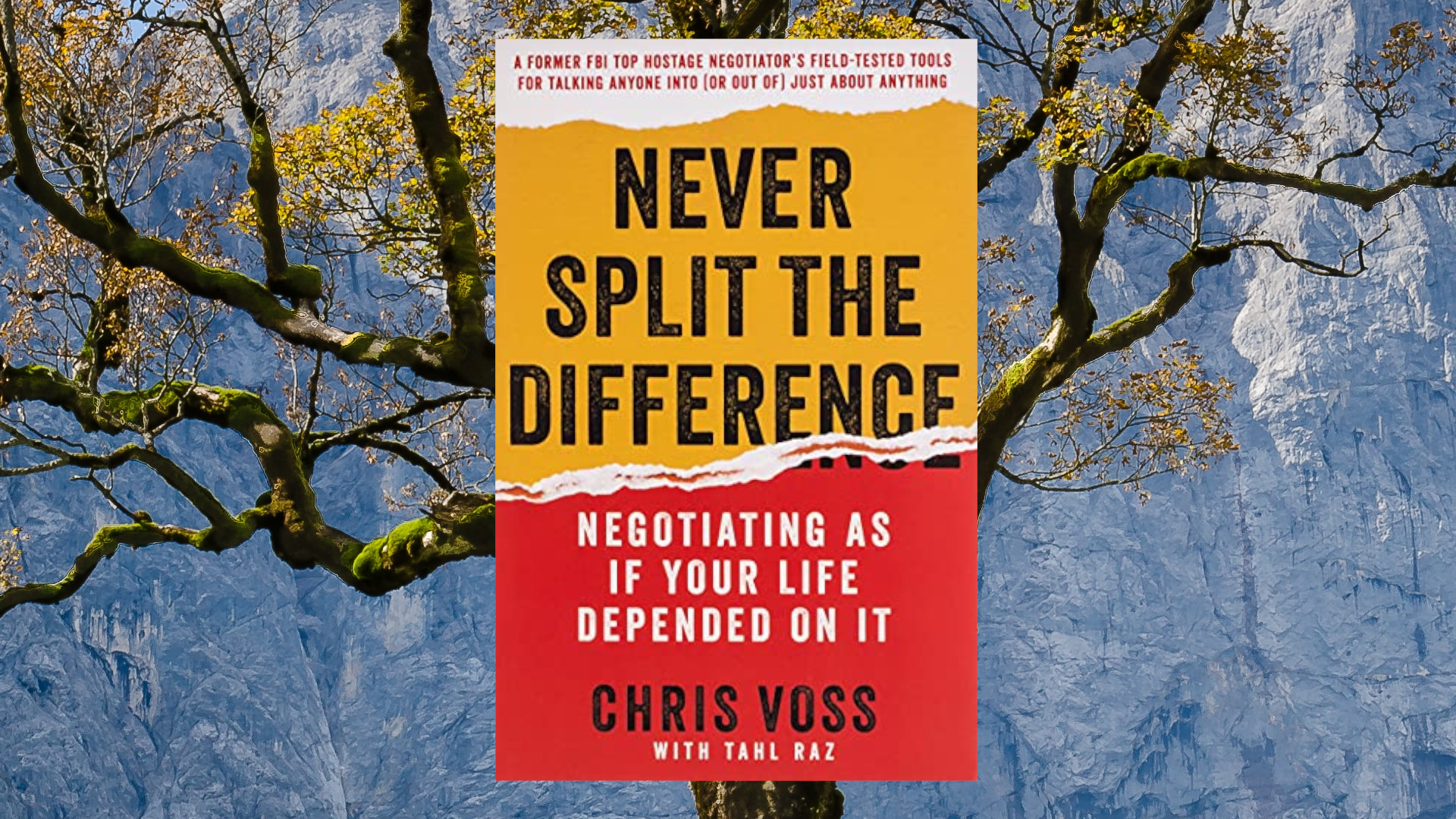 Negotiation is a skill that it pays to know- literally!

This post is based on the 8 best quotes from Never Split the Difference by Chris Voss. You’ll be able to apply them immediately to improve your negotiation skills.

1. “Splitting the difference is wearing one black and one brown shoe, so don’t compromise.”

This quote perfectly highlights the difference in strategy proposed by Voss and the mainstream. Splitting the difference is meeting in the middle. The premise of his book is that this is a bad idea. Throughout the book, he gives examples from his time as an FBI hostage negotiator. The quote offers an example that shows it applies to everyone; everyone can agree that wearing different colored shoes is a bad outcome for both parties.

Rather than negotiate until you meet in the middle, he proposes a strategy built around empathy, listening, and understanding the needs of the other party.

He says this exact quote 14 times in the books. I’m not even going to attempt to count the variations. It’s safe to say that Voss views it as the secret weapon in your negotiation toolbox.

Use this quote whenever you want to say ‘No.’ Using some variation of this allows you to change the dynamic of a negotiation. You are no longer working against each other. Instead, you’re trying to work with the other person. They’ll be on your side and work with you to find a mutually beneficial solution.

In the book, Voss gives us several examples where people keep saying ‘How?’ until their counterpart suggests a solution that is agreeable to both parties.

Improve your negotiations by replacing ‘No’ with ‘How?’

3. “For those people who view negotiation as a battle of arguments, it’s the voices in their own head that are overwhelming them.”

This returns to the importance of listening. He’s talking about people who are formulating the next step in their argument, instead of listening to their counterpart. We only have a limited attention span; trying to listen and process their words while preparing our next point is overwhelming. This results in missing the important information they are sharing.

Pay attention to what your counterpart is saying. It’s what lets you understand their needs, desires, and pain points.

4. “Negotiation is not an act of battle; it’s a process of discovery.”

This idea is closely linked to the previous quote. If we approach the negotiation in a confrontational manner then we’re less likely to achieve satisfactory outcomes. Why?

First, it puts them on the defensive; they aren’t going to be receptive to the terms we suggest. If the negotiation gets heated, they might sabotage themselves just to spite us.

Secondly, this style of negotiation means we can’t pay close attention to the information that’s being shared. We want to get as much information from our counterpart as possible. One small thing they inadvertently share might dramatically change the outcome.

Listening to what the other party is saying can turn a negotiation in your favor!

5. “The reasons why a counterpart will not make an agreement with you are often more powerful than why they will make a deal, so focus first on clearing the barriers to agreement.”

If you’ve followed the advice to this point, then you’ll understand the sticking points in your negotiation. In some cases, they’ll be easily addressed. Others will be more awkward. In Never Split the Difference, we’re advised to use labels to ‘neutralize the negative.’

I could say something like, “I understand you’re worried because we overspent on the budget.” By doing this we can take the sting out of a negative. It shows we understand what the other person is worried about and recognize it’s a problem. Once it’s labeled, it’s less threatening and it is easier to talk about.

Use labels to clear the barriers.

Conventional wisdom tells us that we don’t want to hear ‘No’. Voss argues that it’s actually a good thing and helps us progress the negotiation. Getting a ‘No’ has several benefits:

Don’t fear the word ‘No’. Handled correctly, it allows you to be a more powerful negotiator.

7. “The most powerful word in negotiations is ‘Fair.’”

In the book, this quote is supported by studies that show all primates respond badly to situations they recognize as unfair. It’s a universal response; we don’t like feeling as if we’ve been taken advantage of. Voss gives us a few ways that ‘Fair’ is used in negotiations.

The second is when your counterpart uses fair as an accusation to force you to accept an offer; “We’ve given you a fair offer.” The intent is to guilt-trip us into accepting their terms. He recommends that we respond by asking them to justify how it’s fair.

The final way he recommends we use ‘Fair’ is as a framing statement. Tell the other party at the start of the negotiation to let you know if they think you’re being unfair. This positions you as honest and genuine.

People are more likely to accept a deal if they feel they’ve been treated fairly.

8. “Take the same person, change one or two variables, and $100 can be a glorious victory or a vicious insult. Recognizing this phenomenon lets you bend reality from insult to victory.”

This quote showcases a powerful technique. The amount of work required to earn $100 will change its value. The value the other party gets from your $100 of work will also change how you view it. If your counterpart is going to receive thousands of dollars by paying you $100, you will justifiably feel a bit put out.

The idea of never splitting the difference is relevant here too. Compromising will lead you to a subpar result where neither party feels like they came out on top. One thing Voss recommends is suggesting an acceptable range to your counterpart. This lets you anchor a significantly higher price in their head, which means they will be more inclined to accept the number at the bottom of the range. If you’d presented this number without the anchor, they would have felt obligated to get you lower.

Use ranges when negotiating to make your counterpart feel like they’re getting a good deal.

There you have it: 8 quotes from Never Split the Difference that you can apply to achieve a better result in your next negotiation.

As Voss said, you want to pay attention to what your counterpart is saying. As such, we don’t recommend trying to apply everything at once. Pick the quote you feel would benefit you the most and make an effort to apply it in your next negotiation.

We’d love to hear how you get on – please leave us a comment sharing your experience below!

The Best Quotes from Grit By Angela Duckworth

The Best Quotes from the Allegory of the Cave

Summary of Switch: How to Change Things When Change Is Hard