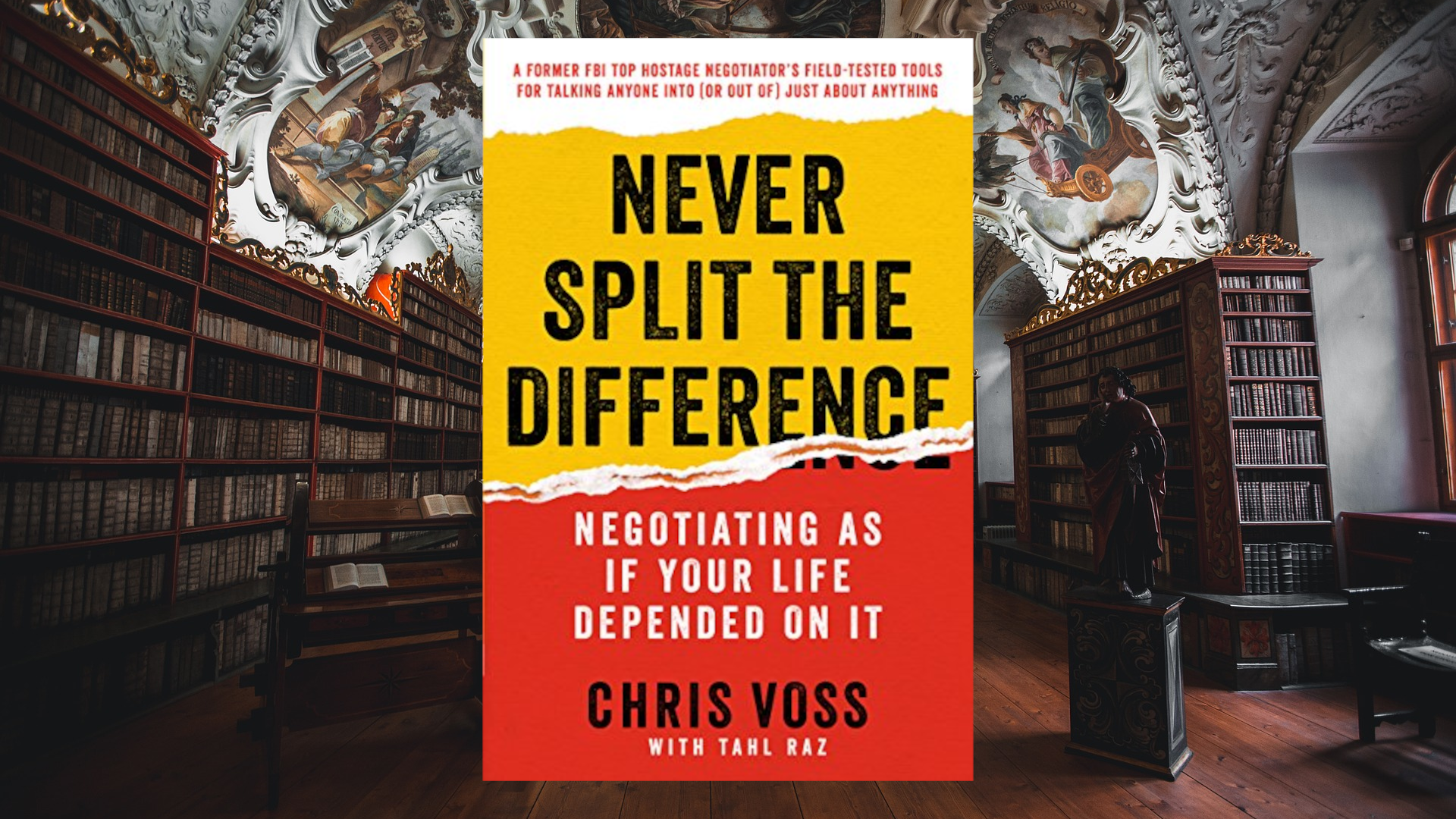 Imagine you’re thrown into a negotiating situation. You’re asking for $1000, but you’re only being offered $500. What do you do? Most people are going to end up meeting in the middle at $750. According to Never Split the Difference by Chris Voss, this is what you absolutely must not do!

Why should we listen to him? He spent 15 years as an FBI hostage negotiator and now teaches people how to improve their negotiation skills. We’re going to discuss the book overall and look at a few useful takeaways.

Never Split the Difference. Why?

This all comes down to the time Voss spent as an FBI negotiator. Let’s say the bad guys have 10 hostages. The FBI can’t split the difference and compromise; anything less than 10 hostages released is a failure. He gives several examples of hostage situations throughout the book, including one where they don’t save everyone. This adds a sense of gravitas that’s missing from lots of business books.

That being said, the book is conversational and easy to read. The techniques he shares are useful for everyone. In his own words, “you could be excused for wondering what hostage negotiation has to do with your life. Happily, very few people are ever forced to deal with Islamist terrorists who’ve kidnapped their loved ones. But allow me to let you in on a secret: Life is negotiation.”

The book contains a lot of actionable advice. The following are the techniques that provided me the most value.

Throughout the book, Voss presents ideas that seem contrary to conventional wisdom. You’ll possibly have heard that you should ask innocuous questions to get a ‘yes’ at the start of a negotiation; really obvious things that no one can say no to, such as ‘do you enjoy food?’ He claims that this puts us on guard and we’re less open to considering the offer. I’m confident most of us have experienced a pushy salesman doing this at some point. I know I don’t respond well to this approach.

Instead, he wants us to get a no as quickly as possible. He claims that “‘No’ is the start of the negotiation, not the end of it.” There’s a lot of value in this idea. The central idea is that by getting to a no we’re starting a dialogue. Once I understand what you don’t want, I can offer you something that better meets your needs.

How Can I Do That?

This idea was burnt into my brain through repetition – he really pushes this idea throughout the book. It’s a method of saying ‘no’ without actually saying it. Rather than saying ‘no’ and making the tone of the negotiations standoffish, you ask some variation of ‘how can I do that?.’ Say this in an empathetic manner and the onus shifts to the other party. You’ve presented yourself as wanting to work with them.

They feel you’re on the same side and will try to facilitate an outcome that benefits you both. It’s a phrase that triggers compromise.

We enter a negotiation with certain expectations; both parties will have a satisfactory outcome in mind. Voss tells us to open with an extreme anchor early in the negotiation.

Doing this sets the frame as we begin to negotiate. If someone tells you a car will cost $35,000, but ultimately sells it to you for $17,000, you’ll think you received a really good deal.

However, if they’d started at $18,000, a price of $17,000 isn’t going to be as easy to mentally justify. You’ll probably feel entitled in pushing for a greater discount.

We can use this to our benefit by starting all of our negotiations with an extreme anchor. It offers a way to drastically alter the other party’s expectations before starting to negotiate.

The Importance of Mirroring

Voss is a big believer in mirroring as a way of drawing more details out of the other party. It’s important to stress that he’s not advising the mimicking of mannerisms. He means repeating back the phrases he wants further information on. Inevitably, the other party will continue the conversation by expanding on the topic – a useful tool when people aren’t being forthcoming with information.

A good negotiator understands the process is about correctly understanding the other person’s point of view and situation. Voss has found that getting the other party to say ‘that’s right’ leads to favorable outcomes.

As a method of achieving this, he suggests summarizing the other party’s viewpoint. If you’ve understood their point of view correctly, then they will respond with ‘that’s right.’ ‘Done properly, he claims that this will bring about a ‘subtle epiphany’. From his experience, he’s found that this leads to better outcomes.

Worth noting is that he emphasizes that there’s a huge difference between ‘that’s right’ and ‘you’re right’.

‘“Consider this: Whenever someone is bothering you, and they just won’t let up, and they won’t listen to anything you have to say, what do you tell them to get them to shut up and go away? “You’re right.”’

‘You’re right’ is bad – if you hear that in a negotiation you should evaluate your position and consider a different approach. Instead, we want to hear ‘that’s right.’ This a good indicator that you understand the other party’s position, where you fit, and anything holding up the negotiation. If you’ve got this understanding, then you’re in a very strong negotiating position.

I enjoyed Never Split the Difference. The fact that Chris Voss negotiated professionally for the FBI lends a lot of credibility to the book. All the techniques were easy to understand due to personal anecdotes showing them in action.

It’s super practical; since reading the book, I’ve used these techniques successfully in business negotiations. Even if you only take one or two ideas from the book you’ll be better prepared for future negotiations. I’ve offered a brief overview of some of them but he covers them in more depth. If you’re interested in the subject I highly recommend reading the entire book.

As Voss says, “Life is negotiation.”

Do you want to split the difference or get the best deal possible?

Did you Like this post on Never Split the Difference by Chris Voss and Tahl Raz? Checkout some of our other book reviews like Cal Newport’s Deep Work or Who Moved My Cheese? Quotes, Characters and Lessons.

(Please note: This blog is not monetized in any capacity. If/when that changes posts will be updated to reflect that change.)