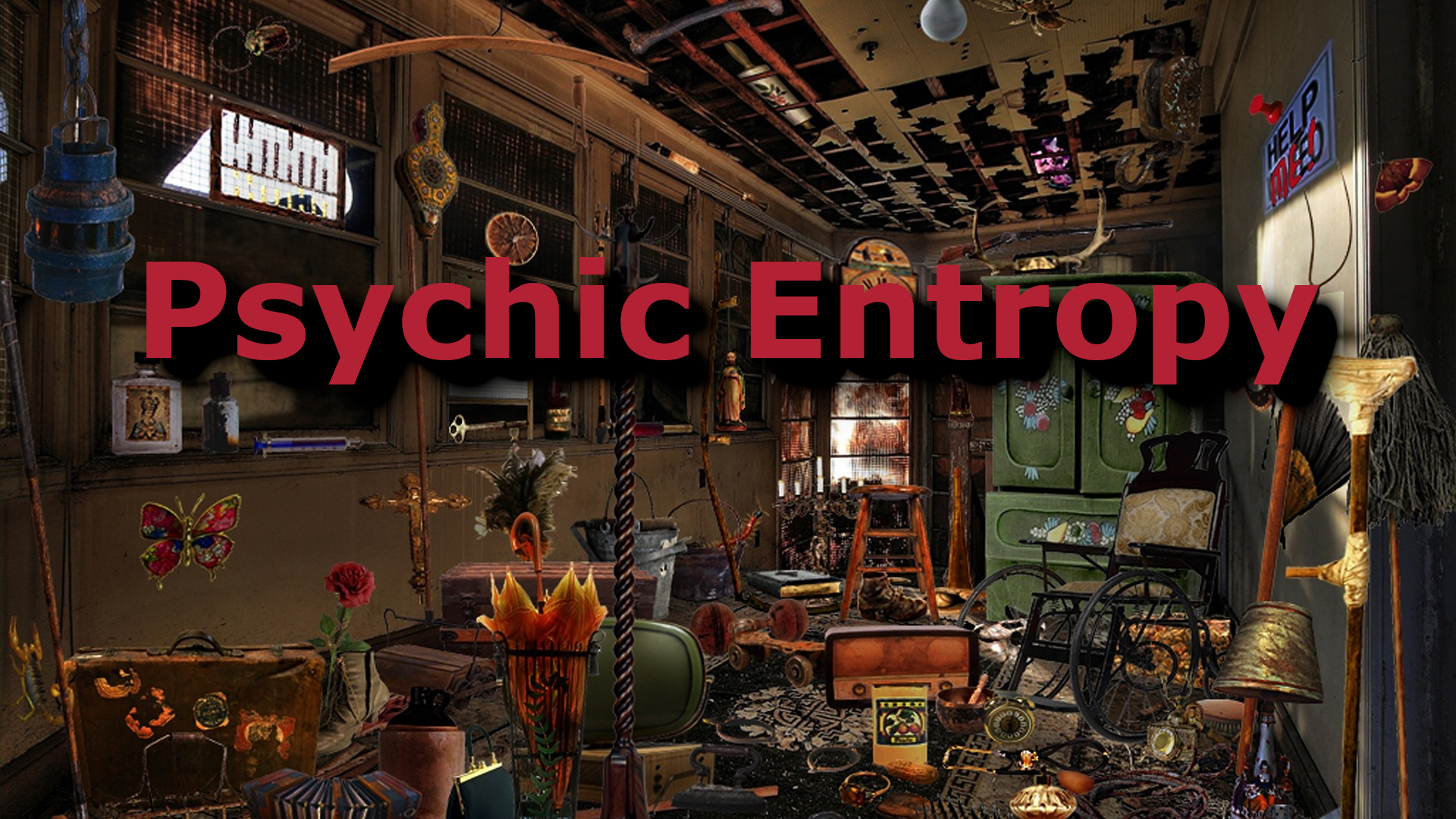 Today we’re going to have a deeper look at the concept of ‘psychic entropy’ as introduced in Flow: The Psychology of Optimal Experience by Mihaly Csikszentmihalyi. This post will explore the definition and effects of psychic entropy and then go over an effective strategy to help break its negative feedback loop.

What is Psychic Entropy?

The concept is introduced in Chapter 2, ‘Disorder in consciousness: psychic entropy.’

“Whenever information disrupts consciousness by threatening its goals we have a condition of inner disorder, or psychic entropy, a disorganization of the self that impairs its effectiveness.”

Unfortunately, this is the most succinct definition we get in the book. The key part of this is ‘inner disorder.’ At its most simple, that’s all psychic entropy is. I’m not entirely sure why Csikszentmihalyi felt the need to obfuscate the term. When explained as an inner disorder the meaning and implications become almost intuitive.

Babies and Breaks and Entropy, Oh My

Recently my washing machine broke. Unfortunately, as the kitchen was built around the washing machine, it wasn’t easy to replace.. It took about a week to get everything repaired. The process involved sawing bits off the old machine, ripping up the kitchen floor, modifying the worktops, and dealing with a burst pipe. Oh, and our baby is due in two weeks – overall, a pretty stressful experience.

I’m not sharing to gain sympathy. I’m sharing it as an example of psychic entropy. For that week, my mind was obsessing over the details. Everything I’d planned was put on hold. It didn’t matter what I was doing; my mind would jump back to the shambles that was my kitchen.
Naturally this isn’t limited to household disasters. Anything that captures our attention and creates inner disorder meets the definition of psychic entropy. As Csikszentmihalyi says, “we give this condition many names, depending on how we experience it: pain, fear, rage, anxiety, or jealousy.”

How Does Inner Disorder Affect Us?

It’s quite obviously a negative experience. But why?

“Prolonged experiences of this kind can weaken the self to the point that it is no longer able to  invest attention and pursue its goals.”

There are 3 main implications of psychic entropy or inner disorder:

A short-term bout of psychic entropy isn’t going to cause you any large setback. The issue is when it becomes a long-term problem. This could be because the original trigger is something permanent – disability for example – or because you’re stuck in a negative loop and view achievable challenges with a negative mindset.

How to Combat Psychic Entropy

Csikszentmihalyi gives us two approaches to fighting it:

This is the brute-force approach and he’s quick to point out that this alone is not sufficient. Improving our wealth, health, or relationships can help, but it’s not a long-term fix for psychic entropy. Eventually, the underlying issue will resurface.

Consider someone whose goal is to be wealthy. Let’s imagine they’re anxious about money. If they’re working for minimum wage then they’ll be happy if they can double their salary. This happiness is short-lived. The new number quickly becomes their reference point for viewing the world. They’ll now compare themselves with people making more than them. Even though their external conditions improved, they don’t consider themselves wealthy and their anxiety returns.

This stoic approach works better long-term but isn’t perfect either. Events happen in the world; they are neither good nor bad. It’s only after we evaluate these events and see how they fit our goals that a label is decided upon.

It’s easier said than done, but if you can reframe external conditions you can lower the amount of psychic entropy experienced. In the wealth example above, the person could reframe what wealth means. Instead of it being just a dollar figure, they might consider it having enough money to regularly go out for dinner with their family.

The obvious problem with this is that they’ll still be subjected to a hedonic, treadmill-like tendency as described in the salary situation above. By attempting to address the issue by reframing it as a meal out with family, at best they’re giving themselves a shot at a long term solution, and at worst their new normal is a meal out instead of lifestyle inflation that eats up their entire pay raise.

How to Avoid the Battle with Entropy

The only way to truly avoid this battle is to cultivate a life of flow. If you can successfully do this, your enjoyment in life will not be tied to external goals; you’ll enjoy the process itself. If you’re wondering how to bring flow into your life, have a look at our review and summary of Flow: The Psychology of Optimal Experience.

Unless you embrace a monk-like adherence to flow states, you’ll still have short-term bouts of psychic entropy as I did with my washing machine fiasco. This isn’t an issue – as soon as you jump back into flow activities, this entropy will subside. You can use the combative techniques outlined earlier as a temporary fix. These give you the breathing room required to re-enter a life of flow.

The Insidious Nature of Psychic Entropy

“The plots and characters of the popular shows are so repetitive that although watching TV requires the processing of visual images, very little else in the way of memory, thinking, or volition is required. Not surprisingly, people report some of the lowest levels of concentration, use of skills, clarity of thought, and feelings of potency when watching television.”

It fits within the earlier definition of psychic entropy. Watching TV provides a steady stream of information, which threatens our goals. Jealousy or anger are immediately identified as negatives, while TV isn’t, which is why it’s so insidious. Most people would say they enjoy TV and don’t think of it as a negative.

Yet, it’s commonly used for procrastination. According to Nielsen, the average US adult will watch almost 6 hours of video content a day. That equates to 91 full days spent watching TV a year! Really think about that: the average American spends nearly 1/4 of the year watching TV.

Can you imagine how the world would change if everyone used that time to cultivate a life of flow? If you agree with Csikszentmihalyi then we’d all be better off minimizing screen time and living more happy and fulfilled lives. We’re much more likely to become high-performing individuals as we shift our time from the passive, unstructured, and mindless pastimes of watching TV and/or scrolling social media (or, worst of all, doom scrolling social media) and instead invest our time in our preferred flow activity of choice.

We’ve explained that psychic entropy is Csikszentmihalyi’s way of describing inner disorder. After defining it, we discussed how to combat it and remove it from our lives. Finally, we touched on how TV (the most popular form of passive entertainment) can create psychic entropy.

If you only take 2 things from this article: watch less TV and cultivate flow states.

The Psychology of Optimal Experience

10 Quotes from the Compound Effect

Deep Work by Cal Newport: A Review and Key Lessons

The Best Quotes from the Allegory of the Cave