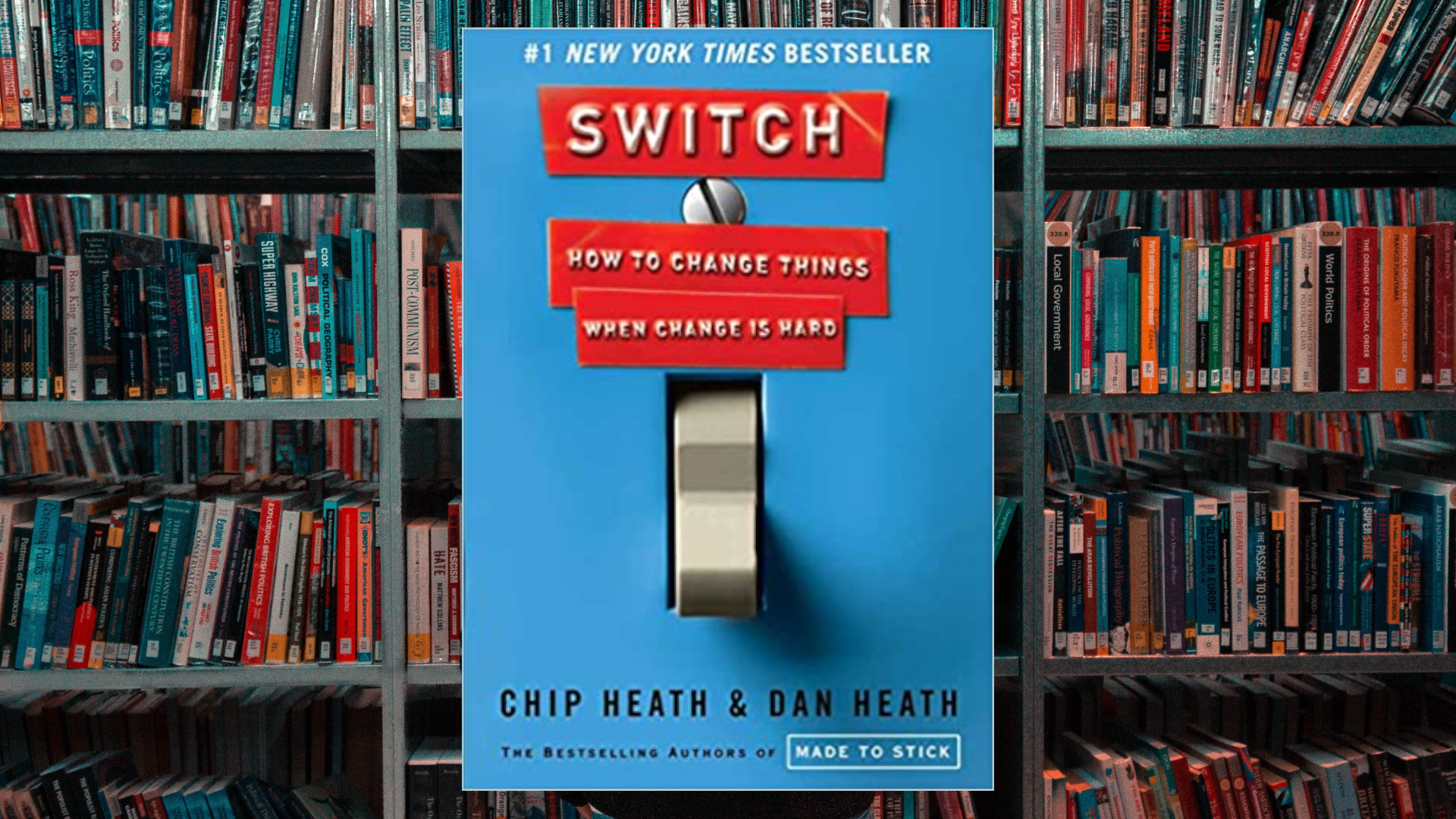 Remember that time you said that you’d get up early in the morning to go for a run, but didn’t?

Or that time you said you’d start following the keto diet and you lasted one day before you HAD to have that pesto pasta?

What about that time you promised yourself you wouldn’t text your ex, but then you got drunk and all those promises to yourself were forgotten.

We’ve all been there. We’ve made promises to ourselves and broken it.

We wouldn’t do that to our best friends, so why do we do it to ourselves?

It should be easy. We know what’s best for ourselves. We know what outcome we want and we know how to get there. Yet, even with all these resources at our disposal and all these roadmaps created by people who’ve already completed the journey that you want to take, we find it hard to get started.

It’s the question that Dan and Chip Heath tackle in their book, “Switch: How to Change Things When Change Is Hard.” Switch isn’t just a book that tells you what changes to make and how to do it. You’ve probably read dozens of books like that and you might have been motivated and fired up at the beginning, only to lose steam at the first sign of an obstacle.

Switch is the second of four books that the Heath brothers have written. While it focuses primarily on changing employees’ behaviour in a business, the book’s principles are ideal for individuals trying to make changes in their lives too. Chip Heath is a Professor at Stanford Graduate School of Business and Dan Heath is a Senior Fellow at Duke University’s Case Center. With their combined knowledge in business strategy, organizations, and social entrepreneurship, the brothers have put together a clear, decisive explanation for why change is hard and how to overcome the obstacles.

So what does science say about change? What do the studies say about why humans seem to be fighting monsters when it comes to changing behavior, even when it’s to our benefit?

Switch goes on to explain that tinkering with changing your behavior means adjusting something that is automatic and ingrained. We’ve done it so many times that we can do it without thinking. To go from a relaxed, automatic movement that requires little effort to something that is conscious and deliberate requires significantly more mental energy.

Our self-control is finite. We have a quota for the day and if we spend it all in the morning, then we have little strength for whatever temptations the evening brings us. Dan and Chip start Switch off by describing a study involving chocolate, radishes, and an unsolvable problem.

Next up, both groups are given a drawing task. The actual task is unsolvable, but the participants don’t know this. The researchers are trying to see which group will last longer when trying to solve the problem.
The results show that the group that had to use their mental energy to resist the chocolate gave up on solving the problem far earlier than those who didn’t have to fight an internal battle with that other voice.

Have you ever felt like there are two people living in your head? Or like there really is a little devil sitting on one shoulder and a nice angel sitting on the other? It could well be true, although it’s slightly more complex since neither shoulder-dwelling voice is inherently good or bad. There are strengths and weaknesses to both. Dan and Chip use an analogy from social psychologist Johnathan Haidt’s book, The Happiness Hypothesis.

On the one side, we have this big, lazy elephant. Sitting on top of the elephant, with the reins in his hands, we have the rider. At first glance, the rider looks to be the one in control; but look again. The elephant can go anywhere it wants, and since it’s so big and it’s the one moving around on the ground, the rider has little choice but to go where the elephant chooses.

Don’t get angry at the elephant, though. It brings its own important piece to the table. The elephant is emotional, but we need these emotions to foster love, loyalty, compassion, and sympathy. With emotion, comes an instinctive desire to do what you want right at that moment. Long-term goals don’t appeal to the elephant. It wants that ice cream and it doesn’t care that it might make you pick up weight.

On the other side, we have the rider. The rider is our rational, logical side. It’s the one that sets the goals. The downside to the rider is that it’s often too analytical and indecisive. The wheels turn, but nothing moves. It has the motivation and it wants to do everything, but it’s running around like a headless chicken with no direction.

This connection that the Heath brothers make between our minds being split into a rider and an elephant is probably one of the best ways to understand the daily conflicting battles that go on in our heads. No, you’re not crazy or lazy or weak because you weren’t able to do something you promised yourself you would do. You’re also not alone in this. Every single one of us has a rider and an elephant at odds with one another.

The difference between the people who are able to set goals, work towards it, and then smash it, is that they’ve figured out a way to get the rider and the elephant to work together. That’s what you have to do.

Lastly, we have the “Path.” The path is the situation or environment that the rider and the elephant are a part of. Studies have found that when we change or shape the path, we can make the change more likely. It gives the elephant and the rider a little boost. If you’re trying to wake up early to go for that run and it’s not working, change the time – maybe the evening suits you best, and make it easier – put your running clothes on display when you wake up.

Switch will help you direct your rider, motivate your elephant, and shape your path.

Now, you just have to read it.

Learn to find strength in adversity with our review of Man’s Search for Meaning.

Improve your productivity with these quotes from Deep Work.

Play the long game of self-improvement with these quotes from The Compound Effect.